Amtrak and CSX have teamed up with local police agencies in the Rochester NY area to remind drivers to take care around railroad crossings. The safety effort started this week along King Road in Chili NY near Rochester.

This railroad crossing was the site of a fatal car and train crash in 2015. Investigators stated that the crossing gates came down and an Amtrak train came through. Before the gates went up, a driver crossed into the path of a CSX train and was killed. 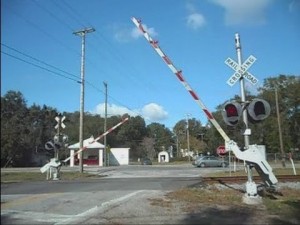 CSX and Amtrak stated that drivers need to be sure that they always yield to signs and signals at railroad crossings.

The Federal Railroad Administration parroted this message during this safety blitz, and the FRA has promoted a mobile phone app that it is working with Google to add alerts about upcoming railroad crossings on its GPS mapping systems.

Railroad crossing accidents are far too common in the US. Thousands of people are killed or injured each year because of these accidents. In fact, the FRA tells us that cars and trains hit each other every 12 minutes in the US.  But contrary to the message promoted by the railroads, the motorist is not exclusively at fault in the causal analysis of tragedies that occur at railroad crossings.

Take as one example stop signs added at railroad crossings in many rural areas. One would think that adding a stop sign at a railroad crossing would be a logical, solid idea to avoid tragedies where railroad trains strike cars or vehicles causing tragic injuries or deaths. In fact, a major study that I blogged about years ago found just the opposite, adding stop signs at many rural crossings increased crossing collisions rather than decrease them. Car drivers clearly need to use great caution around railroad crossings, keeping in mind that modern Amtrak trains travel up to 79 mph and some freight trains travel at 55 or 60 miles an hour. A train can be traveling at 60 MPH or more and appear from around the bend at a railroad crossing in a split second.