A box truck driver jumped to safety just seconds before an Amtrak train slammed into his vehicle in San Diego CA on Aug. 31.

The wreck happened in San Diego near the intersection of West Washington and Pacific Highway. The box truck had part of its cargo bay over the tracks at the time. 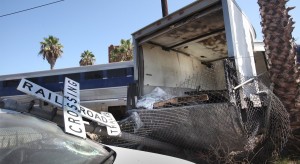 The local police reported that the light turned red on Pacific Highway but the truck was unable to move off the tracks due to traffic ahead of him. The construction company truck was hit by the train just seconds after the driver jumped out. The truck spun into the opposite lanes of traffic and tore off a utility pole. Two other cars were hit, but no one was injured. The cause of the accident is being investigated.

We as railroad accident attorneys in Virginia know all too well the devastating accidents that can occur at railroad crossings across America. The Federal Railroad Administration reports that cars and trains hit each other every 12 minutes, which led to 9600 train/car accidents in 2009.

The reasons for these accidents are many, but they tend to fall into these categories:

Our railroad accident lawyers are experienced in reviewing all relevant evidences – such as train cameras, black box recorders, and signalization information – to see if there were any malfunctions that caused the accident.