The head of the Federal Rail Administration (FRA) promised to be aggressive in urging railroad companies to install newly mandated safety systems as soon as possible, even though Congress moved the deadline back to 2018.

The safety system is called Positive Train Control or PTC, and was supposed to be operating nationwide by the end of 2015. Its widespread use could prevent terrible derailments such as the Amtrak crash last May that killed eight people in Philadelphia. Railroads were behind schedule, so Congress decided to give them three more years to install PTC.

The FRA head, Sarah Feinberg, urged this week that railroads should not delay until the last possible moment to install PTC. She urged them to make it their goal to be first across the goal line. She added that the public deserves the added safety features as soon as possible.

The rail administration stated that it will have additional details on how it will approach the new PTC deadline in the coming weeks.

Train derailments are often completely avoidable tragedies that could have been prevented if the railroad had done proper maintenance on equipment and had followed all federal rules and regulations. 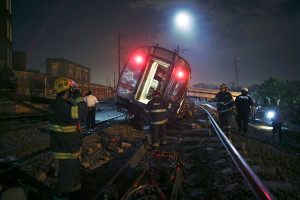 Our legal team went to work on this very complex derailment case. We studied the damage to the sweeper and we brought in an accident reconstruction engineer. We also did a land survey, took measurements and pictures of the accident scene and much more to build our case.

Our theory was that a lack of a full ballast section allowed the sweeper to hit the cross ties and metal rail of the train tracks. Eventually, we proved that the track damage that led to the derailment would not have occurred if the ballast section had not failed to meet the specifications of CSX.

This case went through two appeals, and eventually CSX and Amtrak paid to settle this very complex case. While the street sweeper did have some liability for the accident, poor safety and maintenance on the part of the railroad companies did contribute to the accident.

The rail administration stated that it will have additional details on how it will approach the new PTC deadline in the coming weeks. The railroads collectively advised Congress that they would have to “shut down” unless the deadline for positive train control was extended. While we find it hard to believe that this doomsday scenario would have ever occurred, the railroads convinced lawmakers that there was no feasible way to implement the law by the end of this year.
There are two sides to every story, but it seems like Congress and the federal Railroad administration should have required milestones or concrete steps that the railroads were required to meet by certain deadlines but it does not appear the new extension has required that. One thing is for sure: based on statistics alone there will be some avoidable railroad to derailments and collisions over the next several years that could have been prevented by the implementation of positive train brake control systems.

Needless to say, we strongly support all railroads installing vital safety equipment to prevent derailments – as soon as possible.